skip to main | skip to sidebar

Back in March before I became so sick, hubby & I celebrated our 40th wedding anniversary. I was a child bride, barely 18, and had so many dreams and plans. Most of them worked out & the ones that didn't, don't matter anymore. My hubby was a seasoned adult at the ripe old age of 28. We had only known each other about 3 months when we became engaged & married 6 months later. Most people said that it wouldn't last as we were polar opposites. However, we proved them wrong. Both of us made a commitment to one another in front of God, family & friends. We took our vows seriously & worked out our issues together. We have had our ups & downs & life has been full of challenges, joys & sorrows. However, we made it & look forward to many more years together. So as the wedding season approaches, please remember why you have chosen to marry. My hubby paid me the greatest compliment not too long ago when he said that if he had to do it all over again, he wouldn't change a thing & marrying me was the best thing that he ever did in his life. I so agree with him.
Posted by Marty's Little Corner at 11:23 PM 2 comments: 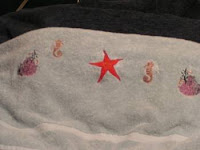 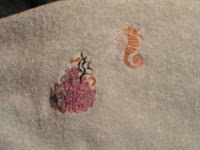 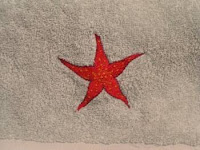 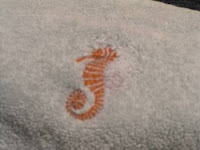 These were a set of bath towels that I received for Christmas from my younger sister. I used Sonia Showalter "Under the Sea" designs for my towels. I really like the way that they turned out.
Posted by Marty's Little Corner at 11:35 PM No comments:

A Little Bit of Embroidery 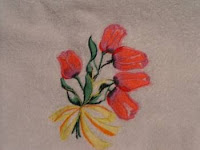 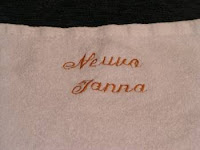 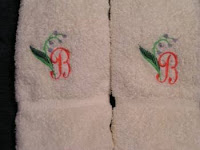 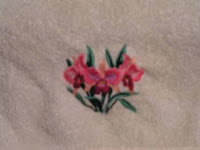 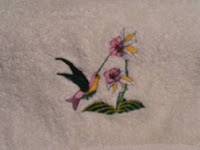 During March, I was teaching a beginner sewing class using Simplicity #2447 until I got sick and had to go into the hospital. I spent a week in ICU-Stepdown with congestive heart failure, extreme exhaustion & severe dehydration. I was discharged a little over a week ago and really missed my sewing machines so I have spent my time embroidering towels while I'm recuperating. After all, I cannot drive right now as my blood pressure is too low. Hopefully, I'll regain my strength soon. The towels were Christmas gifts that I wanted to embroider before using them so this was a perfect opportunity. Here are the photos of what I enjoyed doing. I do love my new Ellisimo.
Posted by Marty's Little Corner at 11:33 PM No comments:

Marty's Little Corner
In 2001, I had to retire from a career in Human Services. Since I have been sewing from around the age of 7, improving my sewing skills is my goal. Married to my soulmate for over 40 years, I consider my life to be very good. I have few regrets and hope to brighten other people's lives with my musings.